Coach Mike Sholars receiving the ENFL Coach Of The Year Award  at the Maadi Olympic Center in Cairo, Egypt 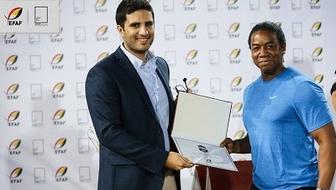 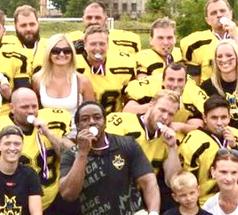 Michael Sholars, commonly known as "Mike", is a Coach of American football . Born  May 12, in Shreveport,Louisiana,, USA.

Sholars has won 5 national championships. in Denmark, Germany, Norway and Sweden, hence the given nickname The Golddigger. His latest accomplishment is being named ENFL Coach of The Year 2016, A silver medal in the Czech republic in 2017, Undefeated in the United Kingdom in 2018, and a Silver medal in Switzerland in 2019, and a National Championship semi-finalist in the Czech Republic in 2020. Sholars has also achieved a perfect season in every country he has coached.

Mike Sholars grew up in White Settlement, Texas. His father was a mechanic and his mother was a nurses aid. He attended Brewer High School (Fort Worth, Texas). At Brewer Sholars was a Team Captain and 4 year Letterman in both American football and track and field, In football, Sholars help led the Brewer Bears American Football team into the play-offs while playing running back as well as returning kick-offs and punts. In track and field  Sholars was a top sprinter in Dallas/Fort Worth from grade 7-12. Michael Ray Sholars was also a champion sprinter and football player while attending Missouri Valley College.